Coach Aggie McCormick has coached AAU/Travel basketball for more than 20 years, and is the Founder of the Fairfax Stars AAU/Travel basketball program. The 2019 season will mark Coach McCormick’s return as the Head Coach for the U17 Girls Nike EYBL team. She previously served as the Head Coach for 8 years from 2009-2016.  The Fairfax Stars are one of only 32 Nike-affiliated teams from across the country. In fact, this year will be the 14th consecutive year of the program affiliation and includes participation with the Nike Girls Elite Youth Basketball League ( EYBL ) which launched in 2014.

In 1996, Aggie started the Fairfax Stars basketball program in an effort to provide more opportunities for girls and boys in our community to be able to compete at the AAU level. She based the program goals and objectives on a fundamental commitment to teach players a wide range of skills while also improving their knowledge of the game. The Fairfax Stars is a volunteer, community based organization that has served more than 7,000 families since its beginning.  2019 represents the 23rd year of Fairfax Stars basketball in our community.

In 2015, her U16 Girls Nike EYBL team captured the championship of the Blue Star National Championship tournament in Augusta, Georgia at the end of July to close the summer showcase season.

With the U16 Nike Elite team over those years, she  led her teams at the prestigious Nike National Invitational tournament at the end of the season. In 2009, her team advanced to the tournament Final Four and in 2011, earned a spot in the Championship game. 2013 produced a quarterfinal finish. Nike Nationals is an invitation-only tournament, attended each year by more than 700 college coaches from across the country.

Each of those previous eight seasons at the helm of the top team produced enormous success while competing in major showcase tournaments across the country. A particular point of pride is that for the past 13 years, every graduating player has earned an athletic scholarship to continue their education.

Coach McCormick is a veteran high school coach, currently serving in her 7th season as the Head Coach of the Bishop O’Connell High School women’s varsity basketball team, competing in the top ranked Washington Catholic Athletic Conference ( WCAC ).  Her team has finished in the top half of the WCAC standings for last the few years.  Each year, her team has advanced to the state championship tournament.  During the 2015 – 2016 season and for the 2nd year in a row, O’Connell advanced to the championship game of the Virginia Independent School Athletic Association State Championship tournament.

Previously she served for 4 years as the Varsity Girls’ Head basketball coach at Hayfield High School. Prior to joining Hayfield, she was the Varsity Head Coach at the Madeira School for three years, where her teams won two Independent School League Championships in those three years. Her teams have won more than 200 games during her tenure as a high school girls basketball varsity head coach.  Coach McCormick loves the opportunity to teach and inspire young women and has enjoyed success throughout her career…both on and off the court.

Coach McCormick has also served as a Varsity Assistant Coach at Langley High School and as the Junior Varsity Head Coach at Paul VI High School during her career.

Four years ago, Coach McCormick was also named to the McDonald’s High School All American selection committee, and in 2015 was selected to coach at the Jordan Classic High School Girls All American game in New York.

Aggie played in high school and college, and brings a unique combination of knowledge and experience to coaching. She teaches her players fundamental skills and how to execute on the court, but she also spends a lot of time teaching her players about the game itself and instills an understanding and knowledge of the game of basketball. She stresses positive reinforcement and seeks to expand her players’ love for the game.

As a former player and as one who has coached at a variety of competitive levels, Coach McCormick recognizes the value of sports in character development and incorporates that understanding in her approach to each team…and each player. She is more than a coach and a teacher…she is a mentor to the young student-athletes she is privileged to coach, and she looks forward with eager anticipation to this upcoming season.

Aggie has served as the volunteer Executive Director for the Fairfax Stars since the beginning. 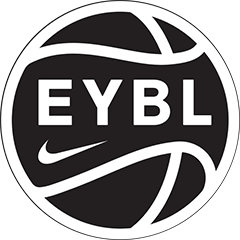 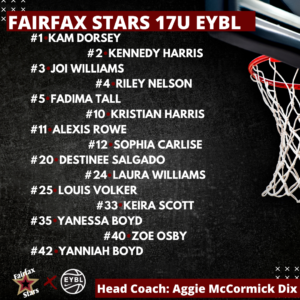 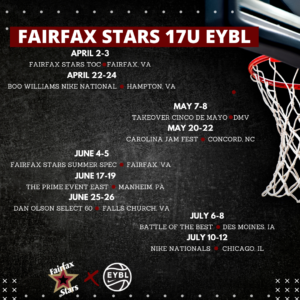