During the summer of 1996, Aggie McCormick decided to move boldly to pursue a dream that she had to start an AAU basketball program that would offer more opportunities for community youth. She knew that while there were a couple of choices for girls in the area who wished to compete at the AAU level, there was no meaningful local northern virginia organization that was available in the Fairfax County area for boys to play AAU basketball without having to travel to Maryland or the District of Columbia.

What Aggie did not realize at the time, was that there was also a growing demand for more opportunities for young girls to play AAU basketball. As a former coach with another AAU organization, as well as a high school coach, Aggie quickly learned that there were more potential players who wanted to play AAU basketball than there were opportunities. Accordingly, with the help of Bob McCormick, Bob Dix, and a few others, Aggie founded the Fairfax Stars AAU basketball program with plans to field teams for the 1997 AAU season. The organization would include teams for boys and girls and the goal of the Fairfax Stars was simple and clear. We would invite qualified coaches to join the program who shared a knowledge and commitment to fundamental skill development for the student-athletes whose ambition was to compete at the AAU level with the Fairfax Stars. The measure of success would not be calculated by wins and losses, but whether each player improved their skills and their knowledge of the game of basketball from the beginning of the season until the end of the season. All in an environment of positive reinforcement and fun.

Everyone in the Fairfax Stars organization is a volunteer. Early on, Aggie set out to identify a group of individuals who shared her passion for working with young people and who would volunteer to accept the challenges and responsibilities of serving on the Stars Board of Directors.

Everyone in the Fairfax Stars organization is a volunteer. Early on, Aggie set out to identify a group of individuals who shared her passion for working with young people and who would volunteer to accept the challenges and responsibilities of serving on the Stars Board of Directors. The organization was incorporated and has been a member of the Potomac Valley AAU region and the national AAU ( Amateur Athletic Union ) organization since the inception of competitive participation in 1997. Additionally, Stars teams are eligible and many also compete in YBOA ( Youth Basketball of America ) local, state and national tournaments.

Since the inaugural season in 1997, over 3,000 student-athletes have competed on Fairfax Stars teams. During that period, the skill development instruction has helped many players improve and compete at a high level in AAU competition. The Stars have become well known throughout the United States by competing AAU organizations, and by college scouts and coaches from across the country. The Fairfax Stars have enjoyed tremendous success at Regional and National AAU Championships as well as State and National YBOA Championships. While participating in national tournaments is not the underlying goal of the organization, the history of success is no doubt the result of the Stars continuing commitment to skill development and improved knowledge of the game.

THE STARS ARE TRULY SHIING BRIGHT!

In the short history of this unique program, boys and girls teams have won several Potomac Valley Regional Championships, along with numerous silver and bronze medals.  The program has also had more than a dozen of its teams nationally ranked at the end of an AAU season.  One of our girls teams has won 6 consecutive Potomac Valley championships, and has finished as one of the top 3 teams in the nation in their age group for 5 consecutive years, including two National Championships!  Most of those players are now continuing their education and competing at the collegiate level.

In addition to the regular season AAU basketball activites, the Fairfax Stars also conduct a Summer Basketball League for all levels of basketball that has grown from a group of 20 teams playing on outside courts in 1998, to an amazing cadre of County League, House League, Church League, Independent, AAU, and High School teams in a variety of divisions that approached 300 teams in 2006.  The popularity of this league and the ability to provide organized, constructive summertime recreation activity with adult supervision for community youth has been an incredible contribution to the area.

The Fairfax Stars program has continued to grow, now with 25 teams and over 300 players, representing the increasing interest within the community to participate in basketball skills development.  The talented coaches continue to teach and to provide exciting opportunities for the players to improve their skills and their knowledge of the game. Our teams earn invitations to National Championship tournaments and will travel to cities throughout the United States to represent the Potomac Valley region and the Fairfax Stars AAU Basketball program.  From Cocoa Beach, Florida to Sacramento, California…from Memphis, Tennessee to Dayton, Ohio…from Virginia Beach, Virginia to Kenner, Louisiana, these student-athletes compete at the highest level, and represent their community with pride and determination.  The Stars are truly shining bright! 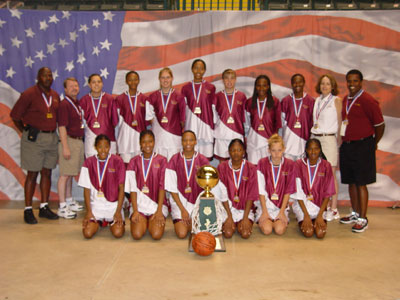 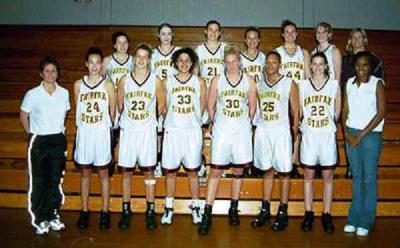