2003 (U13 Girls) AAU-Division I National Champions 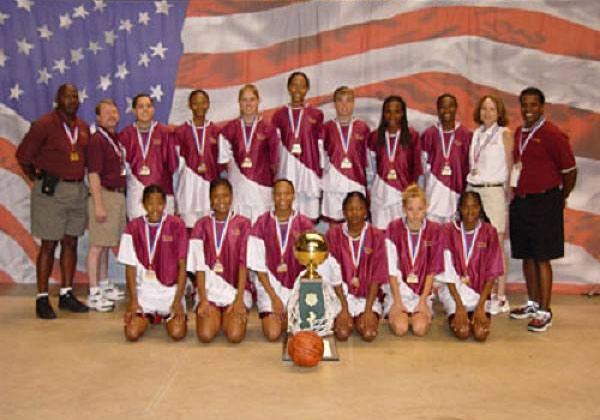 Posted at 14:22h in Highlights, Top stories by Bob

In a remarkable display of basketball skill and knowledge, the Fairfax Stars 13 year old girls entered the 2003 AAU Nationals as the 13th seeded team, and put on a performance indicative of their commitment to the goal they set at the beginning of the season.  After 75 games and a 70 – 5 record, the Stars proved that they were the best team in America!  Of those 5 losses, 3 were to nationally ranked 14 year old teams and 2 were to 15 year old teams, including one that finished in the 2003 national sweet sixteen.

Behind a total team effort and a stifling defense, the Stars defeated the defending national champion and tournament #1 seed Fencor from Philadelphia by a final score of 51 – 47 in the Championship game on July 31st.  The championship game was played at the Nutter Center on the campus of Wright State University.

This is the 1st National Championship for this group of student-athletes and the 4th for the Fairfax Stars AAU basketball program since its inception. As the 13th seed entering the tournament, the Stars went 9 – 0, the only team in the 96-team field to go undefeated, to claim the gold championship trophy.  Congratulations to all of the outstanding players, and to the coaches, parents and fans of this extraordinary team!