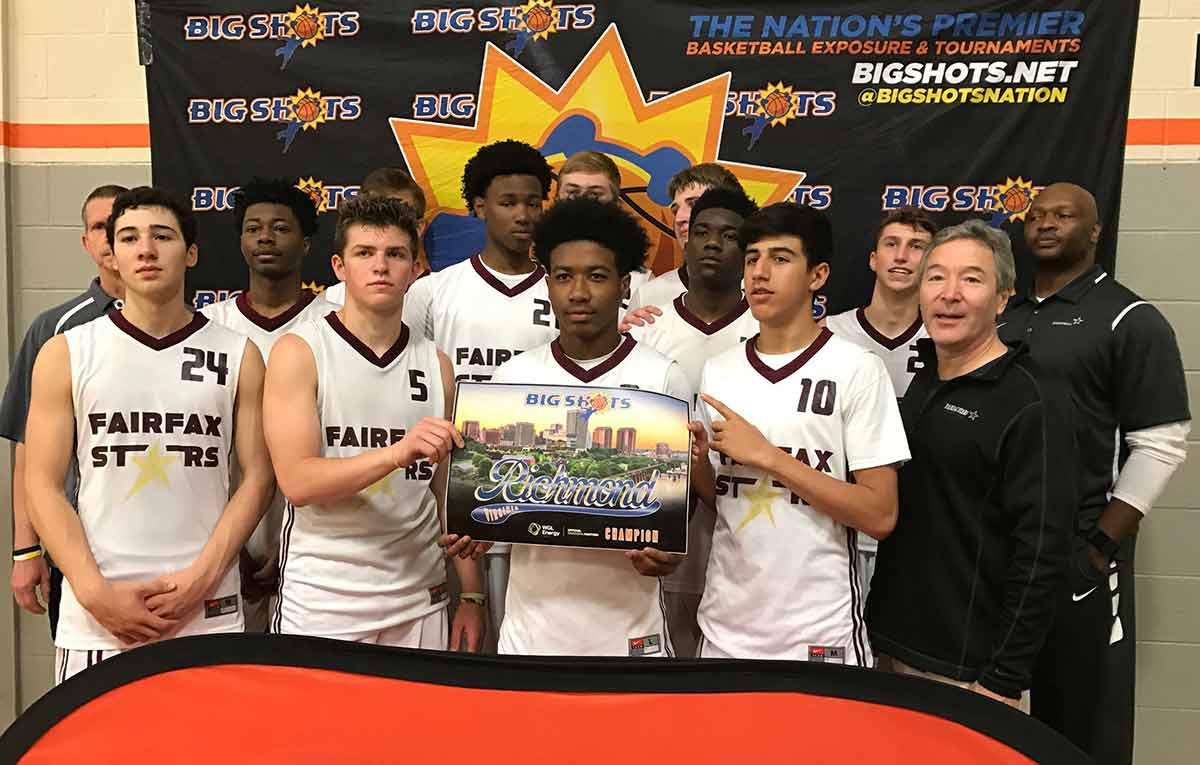 Posted at 19:38h in Highlights by Heidi Magnuson

The Fairfax Stars 17U Boys Showcase team traveled to Richmond for the Big Shots Virginia Live tournament during the first NCAA recruiting period – April 22-23, 2017.  The team got off to a rough start and lost their first game to the North Carolina Red Storm and went into the tournament’s Silver Bracket.  From there, the team came together and won three consecutive games to claim the championship of the Silver Bracket.  The Stars started off with a late game Saturday night at 9:30 p.m. against Quinn Anvils out of Louisville, Kentucky.  The team started off with intense defense and gradually built the lead to 10 points at the half.  After the half the Stars came out with a lot of intensity and gradually built the lead to 18 points with a few minutes left in the game and coasted to a 12 point victory.

The guys were up early the next morning to get to the 9:00 a.m. game with a little bit of rest to get them through a game that was a bit closer.  The Stars faced the North Carolina Gaters.  Both teams came out playing tough defense and eventually came up even at half time.  The teams went back and forth throughout the second half, but the Stars made some key stops and some timely shots late in the game to prevail 39-34.  The team didn’t shoot particularly well in the game and had to win with defensive intensity and rebounding to move on to the championship game.

In the championship, the Stars faced the Franklin County Bulls also from North Carolina.  This was a team that worked hard to execute offensively and played a physical game.  Their patience on offense tested the Stars defense throughout the game, but our team dug in and made the Bulls earn every point.  At the half, the Bulls led by 2 points, but we had maximized our bench and played all 11 players almost even minutes in the half.  The plan was to create the best match-ups in the second half and let the players decide the game.  The Bulls changed up their defense several times in the second half, but couldn’t find any way to consistently stop the Stars from scoring.  Our team executed great zone and man-to-man offensive sets and built a 6 point lead late in the game, but the Bulls weren’t finished.  They hit a couple of huge shots late, but came up just short.

The Stars earned a hard fought victory against a very tough Bulls team and escaped with a slim 1 point win 48-47 to capture the championship.  Throughout the tournament all 11 players contributed to the team’s success which made the championship that much more rewarding.  The coaching staff would like to congratulate they team for bouncing back from a tough loss to win three consecutive games and show their mental and physical toughness.  Congratulations to a great group of players!!!  Go Stars!!!