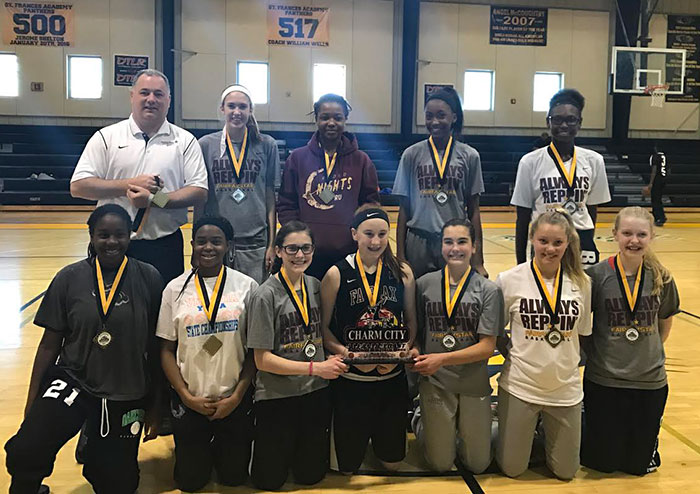 Posted at 19:36h in Highlights by Heidi Magnuson

The Fairfax Stars 8th Grade Showcase (Pre-EYBL) team has gotten off to a very solid start to the season.  For a March “warm up” they participated in the Charm City March Madness where they went 3-0 and were the Gold division champions.  The Stars defeated WV Run-n-Gun, FENCOR, and a pesky NJ Unity team in the Finals.  During the course of the weekend Mack Koch, Chalon Miles, and Chinwe Irondi were named “player of the game”.

Two weekends later the Stars traveled to Atlanta, GA to play in the Naismith Youth All-American Invitational where they swept through their pool undefeated beating teams from Georgia, Alabama, and Illinois. After proceeding to bracket play the Stars won their quarter final matchup before losing in the Gold Bracket Semi-Finals where the depleted roster took its toll over the two days.  During the weekend, Chinwe Irondi, Caitlin Blackman, Skylar Bibbee, and Naja Ngongba were named “player of the game” in the various games.  Following the weekend the “NYAA Scouting Report” had the following to say:

Chinwe Irondi – “Post player with guard skills.  Great Footwork around the rim and finishes well through contact.  Solid mid-range jumper compliments her decent ball handling skills.  Passes well and is a good decision maker.  She is an enforcer, opposing offensive players beware when entering the paint.”

Caitlin Blackman – “Very fast point guard with decent ball handling skills.  Solid decision maker that does not try to do too much.  Needs to strengthen her left hand and a reliable 3 pt shot will help stretch the defense and open more lanes.”

The Stars then went a solid 5-0 in the Fairfax Stars Tournament of Champions winning by an average of 32 points.  All games were against local DMV teams and no “player awards” were given.

This past weekend the Stars wrapped up their first four tournaments with a solid showing in the USJN Capital City Clash for the beginning of the Division 1 open evaluation period.  The Stars won two games on Saturday versus the Maryland Belles (9th) and Lady Prime Marissa Coleman.  Sunday saw the Stars split their games with a tough 8 point loss to the Philadelphia Belles and then a 40 point win versus New York United.  Over the weekend Chalon Miles, Chinwe Irondi, Fiona Barber, Ruva Kiara, and Skylar Bibbee were named “outstanding performers” during the games.

To date that makes EIGHT of the ELEVEN rostered players who have been named an “outstanding performer” during our tournament play.

Next weekend the Fairfax Stars take their 15-2 record to Hampton Virginia for the NIKE EYBL Invitational.